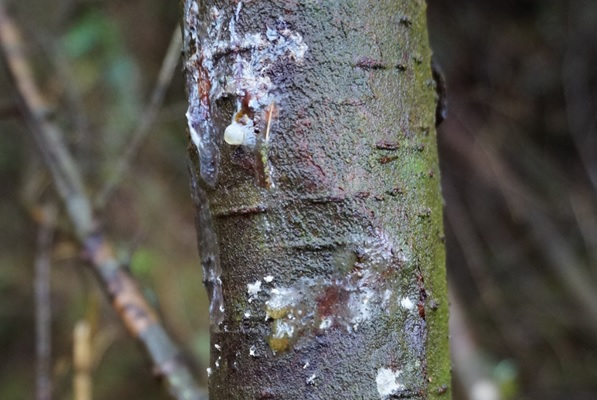 Example of Phytophthora pluvialis lesions on a tree stem.

Phytophthora pluvialis is known to cause needle cast, shoot dieback, and lesions on the stem, branches, and roots.

Read the symptom guide (PDF, 1.76MB, 5 pages) which illustrates some of the symptomatic trees from which Phytophthora pluvialis has been detected in the UK.

Please remain vigilant for signs of Phytophthora pluvialis. If you think you have spotted signs of this disease anywhere in Great Britain then please tell us using TreeAlert.

A risk assessment has been done by the UK Plant Health Risk Group, which has concluded that Phytophthora pluvialis meets the criteria to be classified as a GB quarantine pest for regulatory purposes. To protect the country against this disease, under powers conferred by The Official Controls (Plant Health and Genetically Modified Organisms) (England) Regulations 2019, the Forestry Commission has introduced a demarcated area around the confirmed outbreak site, and introduced movement restrictions on materials capable of spreading the disease using a Notice.

A Notice (PDF, 330KB, 5 pages) comes into force on 19 November 2021, taking over from the Notice issued on 27 October 2021 (PDF, 590KB, 7 pages). As part of this revised Notice, the demarcated area has been redefined and now covers additional areas in Cornwall and parts of Devon. The Notice prohibits the movement of any wood, isolated bark and trees (including live trees, felled or fallen trees, fruit, seeds, leaves or foliage) of the genus Tsuga, Pseudotsuga, Pinus and Notholithocarpus, that has originated within the demarcated area.

Provision is made within the Notice to enable plant health inspectors to authorise movements and processing of material from the demarcated area where this can be achieved without risking the spread of Phytophthora pluvialis.

How to request an authorisation

You can request an authorisation for:

has a very wide range in Europe and Russia. In some countries it is known to be an extremely serious periodic pest on (mainly) pine over very extensive areas. Its caterpillars eat pine needles and can cause heavy and sometimes total defoliation, either weakening trees and leaving them vulnerable to secondary attacks by other pests/diseases or, in severe cases, killing the host trees. 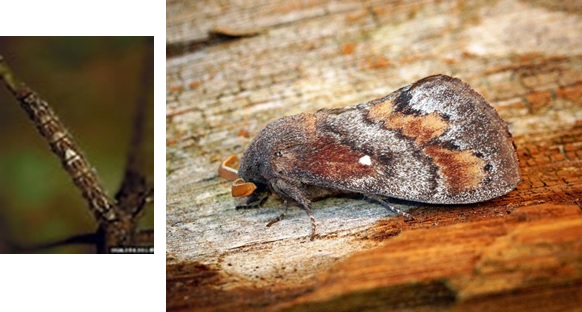 The primary host of this moth is Scots pine but it can feed on other pine species and in outbreak conditions it will also feed on other conifers. Within the UK, this moth is only known to occur in the Inverness/Beauly catchment area, where a male moth was first detected in 2004 (and a breeding population subsequently confirmed in 2009). Although male moths can fly significant distances (kilometres), female moths are far less mobile due to their egg loads. Longer distance spread can occur through the movement of cocoons and larvae on wood and foliage.

A containment programme was launched in 2009 to minimise the risk of further spread. Statutory controls on the movement of timber and branchwood from the breeding area have been in place since 2010. An annual programme of population monitoring has shown that the population density remains very low and the moth remains confined to a relatively small area in the Beauly catchment.

This map shows the Core Breeding Area of the pine tree lappet moth in Scotland.

From 1 April 2021, the timber movement restrictions will continue to apply to all pine species but, in recognition of the continuing low densities of pine tree lappet caterpillars since 2008, restrictions on the movement of non-pine conifers will be reduced to only those growing in mixture (intimate or group) within pine coupes.   No timber movement restrictions will apply outside the Core Breeding Area, but this will be kept under annual review based on results from wider area surveillance.

A timber movement permission from Scottish Forestry is required in order to remove conifer timber from the Core Breeding Area at any time throughout the year.

To enquire about obtaining a timber movement permission for the movement of conifer timber from the Core Breeding Area please contact Highland Conservancy by email.